The "Schwindeltal" or "Dizziness' Valley" layout

January 2017 - While still working on the Eulenschlucht layout, I want to try something new. The idea comes from the new rocks' construction technique by Andreas Dietrich and from my need to develop a new Arduino's graphical user interface (GUI) on smartphone via Bluetooth, as to simplify the management of complex layouts, such as my Euleschlucht one is.

The idea is rather simple yet old, the kind that, you say, "sooner or later I'll get it".

The materials I need are quite few: some plywood, some tracks, an Arduino Mega and a bunch of electronic boards and components. Then also I need a picture frame, as everything will have to be like a picture to be nailed on the wall.

In a very little space, I'll obtain a mini-track, almost all inside the mountain as to hide the trick of this go-and-fro circuit, in a setting that initially will surprise the observer, given its simplicity and its extremely shallow depth: 5, 5cm!

In addition to being a railroad layout (perhaps better defined as an "operated diorama"?) with a mainly scenographic purpose, it must to be played by the user remotely, as it will impossible to simply put phisical buttons on it. For this reason, I dedicated some time to find the best system that could allow me to control everything in the simplest way possible. And what could be easier than using the device that we all have in our pockets? Our smartphone!

Now it's the first time that I have to deal with interfacing Arduino with my Android smartphone (but will be fine an iPhone, with the right software, too), in such as an inexpensive way like with a Bluetooth-serial adapter.

As ever, the space in our house is less and less, and for this reason I decided to give my new layout a particular shape: inside a painting frame with small dimensions: 83cm in width, 5.5 in depth and 45 cm in height. Who, among us, does not have such a small space in his house where "hang" a model layout?

And here are the main features I wanted to put in my new work:

→ A circuit that will allow the train to pass in front of the viewer, returning back along a track hidden from the view, not the usual go-and-fro we are used to;

→ A pair of light signals for secondary lines, fully functioning and made from scratch by me;

→ A landscape that could allow taking different pictures at my model trains in a realistic setting;

→ A fully automated management of the circuit, the control of ambient lights using a bi-directional interface with my smartphone;

Therefore, I order some Knitterfelsen sheet and some 5050 LED strips. Then, found some old track elements, I modified three manual turnouts welding some pieces of thin wire, as to guarantee perfect electrical continuity. In fact, they had to be placed inside the mountain, where it will be difficult to work any more and I need they will be 100% reliable. From my stock, I have all the electronics I need: an Arduino Mega 2560 board, a serial-Bluetooth HC-05 board (RFCOMM standard interface), a motor card based on a L298N, a LED driver board with its 6-channels MOSFET, a self-made board with an EEPROM 24LC256 and finally a simple 2-channels transistor amplifier board for supplying additional high-brightness LED.

Although seemingly being a simple layout, its automation required a careful design, also to allow a high degree of customization of the various operating parameters and an independent functioning of the system. The microcontroller had to be equipped with the needed boards so that the system could be absolutely autonomous, ensuring the supervision, by the operator, only through the graphical interface on his smartphone (possibly being adaptable to other devices, eg tablet, or PC).

Each train sensor was realized using a couple of IR emitter-receiver diodes with wavelength of 940μm, able to detect the reflection of the light under the bottom of the vehicles. Therefore, if vehicles do not have a reflective metal plate in correspondence with their hook boxes, it will be mandatory to glue, below them, a small white plastic sheet for the IR light to be reflected. 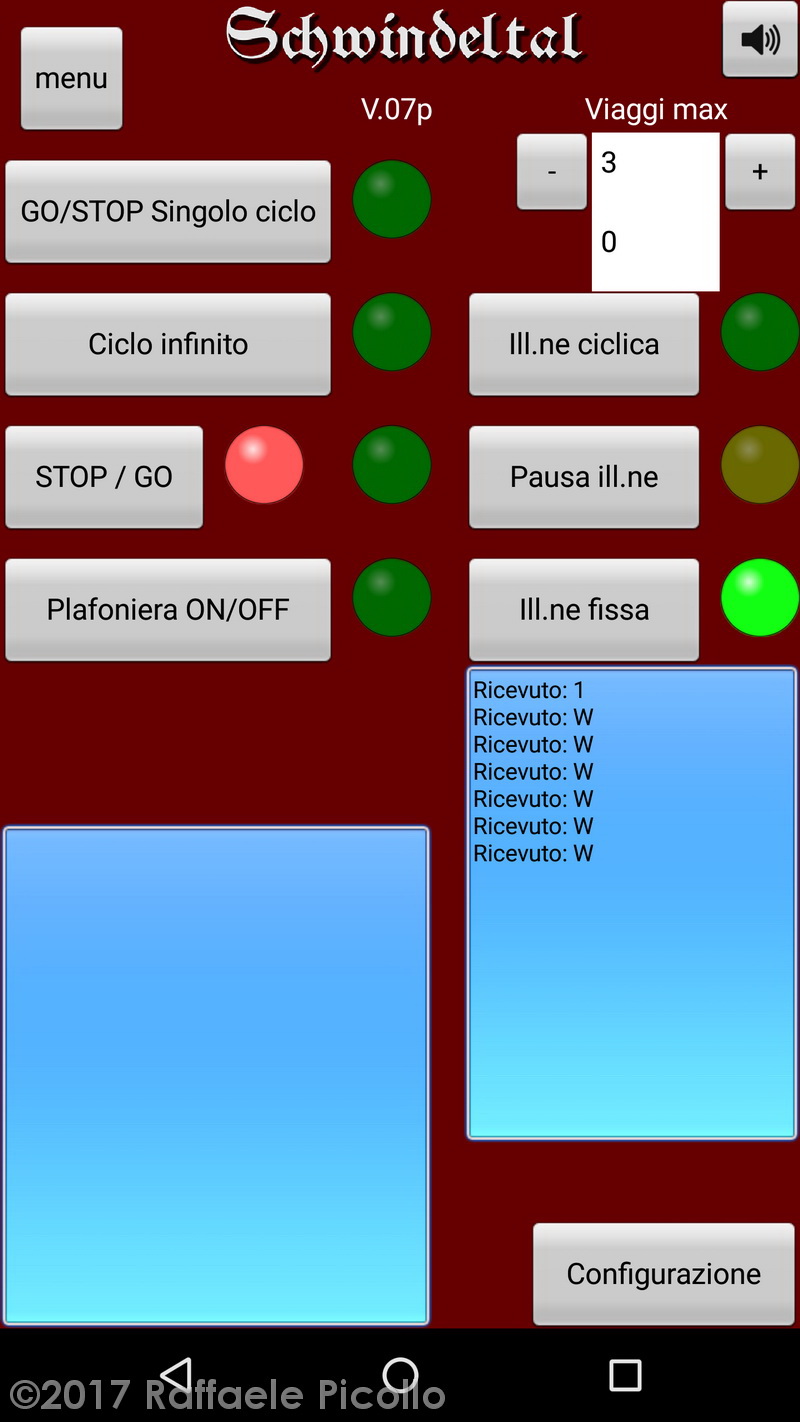 After a couple of months of work, where I alternated tirelessly all the various needed works, Schwindeltal was then exposed to the meeting in Bergisch Gladbach on April 1st and 2nd 2017. It was a real gathering of Z-scale model railway fans to celebrate the 25th year since the foundation of the famous "Stammtisch-Untereschbach" modeling group, located near Cologne, in the Gummersbach-Dieringhausen town.

The many fans and visitors were surprised by this particular layout, given its very little depth gave the illusion that there could be some kind of trick to mask a hidden station behind it.

But there was no tricks at all and Schwindeltal layout, contained within a classic picture frame, allows everyone the possibility to have a real railway model track running at 100% in his home, without requiring a large dedicated space, but only a free wall for hanging it.

It is also independent regarding to the power supply that could, if desired, be provided by a rechargeable battery housed inside the same framework, so that the aesthetic impact, already low due to the presence of only one electrical cable, can also be reduced to... nothing!